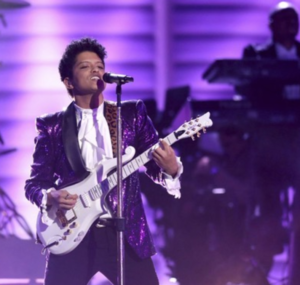 The death of songwriter, musician, producer, singer, dancer, actor and muse Prince Rogers Nelson in April 2016 left the musical world reeling. Fans, friends and colleagues joined together in mourning a great loss of that endless purple trail of free spirit, knowing social commentary, blithe sexuality, and unique rhythms of Funk and Soul known as The Minneapolis Sound. The 59th Annual Grammy Awards set the stage for a rousing tribute to Prince on Sunday, February 12, 2017.

Prince was an enigmatic soul. He surrounded himself with and promoted people who stand tall on their very own, with strong personalities to match their talents. Among these is Morris Day, front man for his own band The Time – who, along with Bruno Mars and his Hooligans, created a shining tribute to Prince, only matched by that of the late creator’s soul mate Sheila E. at the BET Awards (June 2016).

Grammys host James Corden introduced The Time featuring the inimitable Morris Day, who entreated, “If you love Prince, make some noise!” – the audience complied with eager, anticipatory cheers. “Jungle Love” struck up and the “rich on personality” Day delivered strong vocals, while hype man Jerome Benton held it down on percussion. Then, as The Time made their way through “The Bird”, offering up their trademark moves, many in the audience were stomping, clapping and singing along with abandon.

The Time, which was formed by Prince to back Morris Day in 1981, still has both the grooves and the moves, and their energetic renditions of “Jungle Love” and “The Bird” soon dovetailed into the organ strains over which Prince’s verbalization of the opening rap to “Let’s Go Crazy” strolled languorously:

“Dearly beloved…
We are gathered here today
To get through this thing called life.

The symbol for TAFKAP (The Artist Formerly Known as Prince), later to be referred to as “The Love Symbol”, was illuminated to set the stage for what was to come. Bruno Mars, who had earlier performed “That’s What I Like” from his latest album, “24K Magic”, prepared to take center stage.

As the well-known narrative spiraled down into the rhythm-laced guitar of “Let’s Go Crazy”, Bruno Mars and his Hooligans took over the stage, emerging through wafting stage smoke. Bruno, whose normally tight, curly coif sported a naughty curl at the forehead, was dressed like The Purple One, in a spangled purple fitted blazer and slim pants, his neck swathed in soft white fabric that cascaded downward in generous ruffles; his shirt sleeves terminated in long ruffles that flowed past his jacket sleeves and onto his hands, which alternately played guitar and gestured to the enthusiastic crowd.

Bruno was flanked on his level by the rhythm section, while the horn players took a higher tier. The Hooligans, his band of soul and funk brothers, Philip Lawrence (co-writer, co-producer; vocals and hype man), Jamareo Artis (bass), Phredley Brown (guitar), John Fossit (keyboard), Kameron Whalum (trombone), Dwayne Dugger (saxophone), James King (trumpet), and Eric Hernandez (drums) moved in synch, their energy vibrating as one behind their lead singer. Bruno kept time while deftly playing lead on a white Schecter guitar, sleek in his fitted suit and light on his feet.

It is a bit of providence that Bruno’s vocal range snaps almost perfectly onto the imprint left by Prince’s – he solidly carried the melody and attacked the exclamations and hits like a master. This was far from mere imitation – it was clearly Bruno Mars’ style on display, as he rendered the solid gold classic. A lesser vocalist would have lost some luster, for Prince was a whirlwind of style, talent and finesse that few could ever hope to cover. And with this privilege, this honor, of being blessed with the opportunity to share his love of what Prince had laid down, Mars’ joy was apparent. Like a man possessed, he worked every note with aching clarity, even half-affecting Prince’s sultry side-eye as he peered into the audience to deliver the late composer’s celebratory message.

Mars roused the audience with worthy guitar solos, tossing in occasional shades of himself while maintaining the whole. Ecstatic guitar runs wrote themselves onto his face, at times making him throw back his head, smile and close his eyes. The song approached its inevitable cacophonous crescendo, drawn forward by Mars’ nimble fingers as they tripped across and stroked the strings, pulling and pushing away, then exploding in circular runs that made the crowd explode in a frenzy, taking one more loping run up the mountain, to a glorious implosion and thunderous applause at the coda.

The Minneapolis Star Tribune quoted Morris Day, who said it best: “Bruno Mars ripped it up!”

Prince Rogers Nelson was an amazing communicator. He had an eye for talent and built and/or strengthened many careers with his touch. In the annals of music, he is clearly without parallel. Only a kindred soul could function as a conduit to all of that DanceMusicSexRomance; Bruno Mars, in executing the nearly impossible, has demonstrated not only his skills, but the depth of music that is with him always, in his very core, as it was for Prince… pressed down, shaken together and running over.