REVIEW: Bruno Mars Brings Down the House Live at the Apollo Theater! 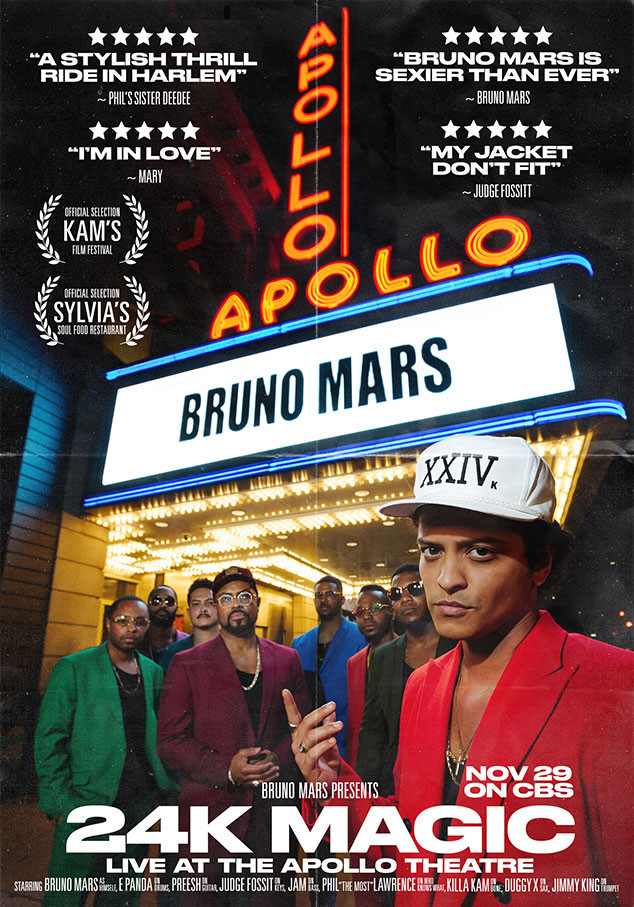 The CBS television special “24K Magic Live at the Apollo” kicks off with a madcap melange of cross cuts of the Hooligans patrolling the streets of Harlem, New York announcing their upcoming appearance at the Apollo Theater. Bruno Mars ends the segment with a co-intro from one of his Harlem fans, “Mary”, who blithely informs him that she will be there tonight, dressed in a sexy red dress.

The concert launches atop the legendary Apollo marquee with a lively rendition of “24K Magic”, then cuts to the gathered crowd inside the theater yelling “Bruno, Bruno!” as the New-Jack-Swingy “Finesse” vamps to the sight of the Hooligans making their way onstage after rubbing palms on the Apollo Tree of Hope.

Surrounded by brass, and accompanied by his co-producer, brother in arms and hype man Philip Lawrence, Mars allows his enthusiasm to spill forward into the James Brown-inspired “Perm”. Slowing things down to Quiet Storm sexy is “Calling All My Lovelies”, which chronicles a reluctant crawl through the “little black book” when the Number One is nowhere to be found. Following a soulful guitar solo, Philip’s plaintive croon pushes through to the sound effects of a ring and answering machine pickup, where Bruno lets the absent lover know that Mary in the Red Dress is the new lady in his life by serenading her from the stage!

The segue is naturally an entreaty to hit the club, as the band begins “Chunky”, an ode to the Girls from Around the Way. The crowd is with the band all the way, singing, dancing and clapping enthusiastically. Then, a cut to a street scene with an a Capella chorus from “Treasure” as people troop up a stoop past the Hooligans, likely hearkening back to the days when Bruno’s own dad, Peter Hernandez, sang under street lights as a member of a Doo-Wop band.

Back on stage, the Hooligans charm their way through “That’s What I like” with the audience heard singing along to the refrain. A slightly Jazzy spin towards the denuoument provides the foundation for a solid breakdown that has the ladies swooning and the gents taking notes. The transition to “Straight Up” is inevitable, with blue lights swirling about, reminiscent of dimly lit basements during the golden age of the smooth 70s male groups.

“Versace on the Floor” is enchanting, as Mars rephrases the private whispers of a paramour to his lady to set the stage for the mid-tempo romancer. At song’s end, a touch of hilarity – a sidewalk vendor hawking CDs is asked if he has any Bruno Mars only to answer that “nobody ever asks for it”. The look on his and Philip’s faces is priceless! Not one to wallow in rejection, Bruno moves on to enjoy some Soul Food and a jam session, loading up his plate and then getting both behind the mike and the counter, taking orders from appreciative patrons at Sylvia’s Harlem Restaurant.

“This has gotta be the most special thing I’ve ever done in my whole career,” Bruno announces to cheers, as he introduces “Uptown Funk”, which turns into a call-and-response with all the girls (and boys) hitting their hallelujahs throughout. The energy spirals upwards, turning frenetic for this finale, as pink smoke billows forward and the band finds their rhythmic crescendo.

“24K Magic Live at the Apollo” is the romp that refreshes!