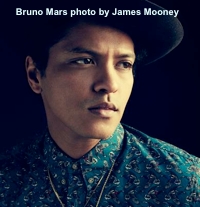 I am now old enough to have enjoyed various decades of what I consider soul music. I had not heard Femi Kuti‘s “Beng Beng Beng” in quite a few years, and when I first heard it, I had not the experience to grasp its full essence (late bloomer, LOL) even as the lyrics and tumbling percussion painted vividly across my mind’s canvas. It’s tame compared to a lot of what’s out there today, but in 1999 it was banned in Nigeria.

It’s today, and I have heard and re-heard Bruno Mars’ “Gorilla” at an age where I finally know what it’s all about. Stunningly primal and more explicit to my ears, but delivered in the same ingenious way:  the vibe is conveyed via  rhythm and voice (and Mars is a veritable acrobat). As with Femi’s tune, I realize that it’s “not for everyone,” but it sure speaks to ME.

Weaving himself effortlessly through a carefully crafted wall of sound, Bruno Mars has the chops to not rely on it for support. In fact, he bounds through it as though the “jungle” he’s devised is littered with strategically placed trampolines. Telling the story of an earthily romantic tryst that transcends the ordinary, he figuratively pounds his own chest with ecstatic joy in each verse and chorus.

For the purists, be warned: Mars makes reference to a bit of a chemical assist (“I got a body full of liquor / with a cocaine kicker”) that is certain to raise eyebrows and consternation.  Even the song title skirts the edge of propriety, invoking animalistic imagery (“You’ll be banging on my chest / Bang bang, gorilla!”).  As if that is not enough, one envisions him tossing his head back towards the end, crooning “You’ll never be the same baby once I’m done with you…!” which quickly devolves into a whoop at the top of the scale.

Another advisory: this entry on his “Unorthodox Jukebox” album features some well-placed profanity. It’s not the language that gives this tune its rawness.  In fact, its use feels natural considering the context:  two people so well engaged in each other’s chemistry that the world falls away.  The song taps into a sense memory for some, and creates a tempting goal for others. “Gorilla” does not provide a voyeuristic journey so much as an inner escapade that warms all kinds of cockles. That’s a little movie that everyone should get to live at least once. What can I say, but Bang Bang.