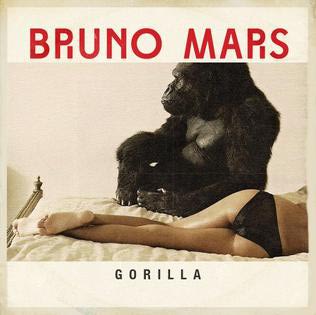 Bruno Mars’ “Gorilla” has a video.  This Hooligan had feared its fiery lack of innuendo would consign it to the “LP cut” pile, never to be released for human consumption due to its piquancy. “Gorilla”, from Bruno’s album “Unorthodox Jukebox” is a bellicose anthem dedicated to raw, unbridled, soul-altering sex. How could it ever go mainstream?

A review posted on this blog about Gorilla some time ago paid tribute to my favorite Bruno Mars tune – without any hope of it becoming as common as bottled water. Like many, I was acquainted with Mars’ music without much involvement until October 2012 when he rendered such a poignant delivery of “Young Girls” on Saturday Night Live that his catalog was inhaled by my iTunes player.

A radio veteran, I am not content to listen only to the hits, instead preferring to “put the needle on the record” and walk away. As I was moving between rooms, I heard the second verse of “Gorilla” – ‘call the cops, call the sheriff, call the SWAT…’ and I nearly dropped what I was holding. I said to myself, “play that again” and I did, from the beginning. This cut became my favorite song by Bruno Mars out of all the songs I’d heard. But I never thought it would see, shall we say, the light of day.

Amateur video of #GorillaLive accompanied Bruno and his band, The Hooligans from stop to stop of the Moonshine Jungle World Tour, whipping up his fan base – but would it play in Peoria?  Cut to the 2013 MTV Video Music Awards, where, in a field of some pretty flashy acts, Bruno easily provided one of the night’s most riveting performances (“Gorilla” live) with both thrilling voice and raw emotion. The audience was spellbound.

A radio version of “Gorilla” made the rounds, and the buzz over a video was unrelenting. Finally, the day of the big reveal (after a one-day delay)… October 15, 2013. That’s enough background; let’s get down to the nitty-gritty.

The video opens in the dressing room of a strip club. To the strains of another UJ cut, “Money Make Her Smile”, two strippers (in Spanish) are discussing the new girl, who has captivated the venue’s band singer, played by Bruno. One apparently had been involved with the singer, and she declares after applying a thick coat of crimson lipstick, that while she may have lost the guy, she would not be losing any work to this intruder – and further, she intends to expose the affair to their mutual employer. At that point, in walks the proprietor, played by none other than character actor Luis Guzmán. He calls out to Isabella, who had been hiding and eavesdropping, to the surprise of her co-workers. As she departs the room, she drops her half-smoked cigarette into the drink of the woman who had been dogging her.

The red in the video’s title and the lipstick carry over into the bar and lounge, which is a disjointed ‘garden’ with crates of fruit, peeling floral wallpaper, and an incongruously elegant green neon sign in a bubbly cursive right behind the band, “La Jungla (The Jungle)”. Another interesting sight at this nightclub, is the odd neon crucifix – sin and piety together, as though they are actually joined beyond our collective knowledge. The owner of the club takes to the mic, urging the crowd to welcome this new addition to the lineup and the opening percussion of “Gorilla” begins. Behind him are a nodding woman, pictures of scantily clad ladies, and prayer candles, a surprising set of contradictions. Back in the club, Isabella peels forth the curtain and walks out past the band. The singer eyes her with an unrestrained longing (or is that dread?), and she gets to work. As the singer and band perform, she does also, on a pole. Defying gravity and decency, she slides down with legs flaying sensually, holds her body perpendicular while spinning around, and lowers herself with her legs to the sky. All the while, the singer is fantasizing about her lying back in wait for him, as she rolls about the stage.

As his memories of their last encounter seem to mingle with his visions of their next rendezvous, Isabella bangs her chest (“Bang, bang – Gorilla!”) and rips open the short coverup she had been wearing to reveal a body suit that features criss-crossing straps that lead to translucent diamond patterns in strategic areas, and sparks literally fly. Here I must acknowledge a friend’s contribution (Twitter user @LotusBee27 whose perspective on the symbolism led to additions to this review) that the effect was that of snakeskin – that this dancer was both Eve and the Serpent in the Garden of Eden. If this is so, the sinuous way she slid down, then around the pole, adds to the illusion. The men seated in the audience erupt in fascinated joy at the sight of her toned and statuesque form, and begin cheering and tossing money her way – much to the consternation of her stripper colleagues, who feel eclipsed by the incendiary performance. One gentleman actually forgets himself completely and shoves a lap dancer off of him!

As the stripper Isabella continues, the singer remembers – or anticipates – a hot sexual encounter with her in the back seat of a car. He is alternately gentle and bestial, his eyes sometimes pleading, sometimes predatory, as their hands and tongues explore each other. At a time in the song that signifies her approaching ecstasy (‘give it to me baby, give it to me…!’), she screams the words while kneeling in the midst of the men’s money all about the stage. As she bangs his chest during his reverie, in reality she executes a daring split which sends the men in the crowd into a frenzy of whoops… and another hailstorm of money flies her way. As Mars’ character crows about his own prowess (‘I got your body trembling like it should… you’ll never be the same baby once I’m done with   you…!’), Isabella maintains control of the situation. She does what few ever do – she touches a musician’s instrument (licking his guitar!), then drags it off to be incinerated under a libation of tequila and a well-dropped blazing matchbook. She quite literally “destroys” his “axe”, and by extension, him – and he lets her. This Romeo seems too far gone to see that this young, wild girl might very well be the death of him. At his vocal climax (being polite here, if that’s possible) water gushes from an overhead sprinkler – his destruction is complete. The water does douse the flames of the guitar, but the burning in our hero is waxed rather than waned.

Scenes of the two in the car, each taking turns being the aggressor, add to the heat factor throughout the band’s performance. As steamy as all of this is, the singer and Isabella remain fully clothed – the chemistry between Bruno Mars and the actress, Slumdog Millionaire’s Freida Pinto, is remarkably intimate and fine. They actually appear to be in love, but it becomes clear during rapidfire cuts between the stage and the car, that it is money that makes her smile, and if that singer is actually falling for her, he is doomed. Perhaps this is in the mix of his expression as he sees her strut onto the stage, and again as she departs it.

Once she leaves the stage, we see the singer, running down a dark alley, towards her vague outline in the distance. The figurative canal, leading to her fire, is a long way from the ‘spiritual waters’ in “Locked out of Heaven”, yet both songs describe the same experience from a different angle. “LOOH” is the ethereal, “Gorilla” is the earthy. As he gets closer to the woman who is now aflame, we see close-ups of her eyes, then darkness.  Cutting back to the alley, we see that the singer has devolved into a rampaging gorilla, heading further, past the point of no return, into the darkness, to meet his sweet fate. Perhaps to be done in by his own sword… As the final orchestra hits resound and the bass hums to the conclusion, we view our diva, lying back, satisfied and smiling – and the singer’s hand rests across from her on the top of the back seat.

This music video provides an incredible back story to a more than vivid march through the mind, heart and body of a man on fire searching for Heaven but headed for Hell. With the help of co-director Cameron Duddy, Bruno Mars cut a path through this “jungle”, his creation, to expose the full measure of his lyrics. He knows all the corners and every tree, and he’ll be the first to let you know, “he gotchu.” So fall back into his arms and let this Tarzan show you the mysteries of his house. Ladies and gentlemen:  “Gorilla”