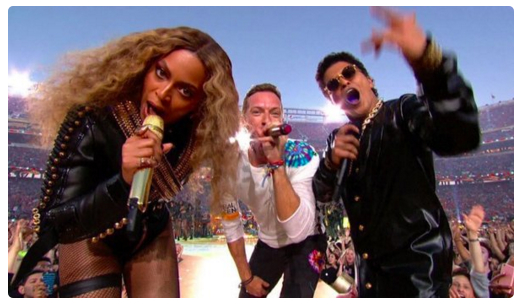 In September of 2015 Bruno Mars fans celebrated the revelation that he and his “band of merry men” (the Hooligans) would be involved in another Super Bowl Halftime Show. After all, the then-record breaking February 2014 Super Bowl XLVIII performance that brought back seminal Rock/Funk act The Red Hot Chili Peppers resulted in the generation of millions more fans and a surge in ticket sales for the Moonshine Jungle World Tour, which ran from June 2013 to October 2014.

Questions swirled as to who Bruno would select to perform. By December 2015 British rockers Coldplay had announced that they were taking the stage for Super Bowl 50; by early January, sponsor Pepsi revealed that Beyoncé had been added to the lineup. Beyonce was also a halftime show vet, having reunited with Destiny’s Child members Kelly Rowland and Michelle Williams in 2013 for Super Bowl XLVII. Bruno himself, hard at work on album number 3, had delivered a spotty trail of select and private performances since the end of his tour, and by now his fan club (also called “Hooligans”) were slavering for the return of their hero – and they were not being quiet about it.

The competitors on the field (the victorious Denver Broncos and Carolina Panthers) were not the only ones playing the dozens that night. By the time Coldplay had completed its first mini-set and yielded to Bruno Mars, both the media and the fandoms had begun stacking the 3 acts against each other. In this writer’s opinion, this type of chatter only illustrates the shifting of the audience’s ability to take in a performance as a sum of a variety of flavors. The insistence that each performer deliver a “big bang” takes away from the enjoyment of a finely crafted spectacle and fails to appreciate each contributor in his or her own right.

The flow of this show is to be appreciated rather than separating out its unique and diverse parts and pitting them against each other.

Coldplay took the stage first amid fireworks before a background of placards held by people in the stands forming a bright sunburst over blue sky. Frontman Chris Martin became part of the crowd immediately, crouched on the field as the crowd surged forward, and then running up on stage to join his musicians for the hit “Viva La Vida”. As the stage beneath him appeared to swirl in psychedelic patterns, violin-playing children from Youth Orchestra Los Angeles leapt and sang the chorus. Martin’s energetic and generous performance never waned, as the strains of “Paradise” called forth the University of California Marching Band. Horns, streamers and a pink and orange motif dominated. Quickly moving to “Adventure of a Lifetime” Coldplay welcomed a series of parasols onto the field, with multicolored flower shapes painted on top and forming vibrant patterns seen from above.

Coldplay’s medium-tempo selections were delivered perfectly, and as the audience echoed the whoops in the chorus of “Adventure” a sampled “hold up!” and DJ’s scratch heralded Mark Ronson’s jam on the 1’s and 2’s as a variation on the “Uptown Funk” graphic was interspersed with the words “ARE YOU READY” on his stylized booth – then Bruno Mars took the stage with his band, side skipping forward and turning, landing with arms raised to begin “Uptown Funk”. Joining them was the video’s choreographer and Jabbawockeez dancer Phil Tayag. Decked out like MC Hammer circa 1990, in custom Versace black leather, gold chains, shades, and Nike Cortez sneaks, the troupe executed lightning-quick dance moves with precision. In the midst, Mark Ronson’s injection of the horn hits from James Brown’s “Get Up Offa that Thing” signaled the beginning of a musical and dance mashup that sent the crowd wild.

At the point in “Uptown” where the boys yelled “Stop! Wait a minute!” all eyes returned to the field from the stage, to a female-only drum line flanked by ladies dressed all in black – stylized Black Panthers. The drum line broke open, revealing Beyoncé, locks flowing, in a military-style top with representative bandoleers criss-crossing her chest, harkening back to Michael Jackson’s 1993 production for Super Bowl XXVII. As she dropped it hot for “Formation”, which she had released only one day earlier, she held the crowd in thrall.

As she began strutting her way to the stage, Bruno and his crew began to tease and test both Beyoncé and the crowd itself, exchanging moves and chants, preparing to do “battle”. Once the horn set from “Are You My Woman (Tell Me So),” a 1970 song by the Chi-Lites (also sampled on Beyonce’s “Crazy in Love”) sounded, the viewers in and out of the stadium lost their collective minds. As Bruno sang “Don’t believe me just watch” he and Beyonce now stood side by side, and turned to one another, sizing each other up, giving each other “beef” just as urban youths settled interpersonal grievances during the golden age of Hip Hop by spitting lyrics and/or dancing. As they began to move forward to “Uptown Funk” they were once again joined by Coldplay’s Chris Martin, for the chorus of the Grammy-nominated barnstormer.

As the climax of the show crashed in screams and fireworks, the lead singers disbanded, and Coldplay’s “Clocks” (musical interlude) walked the audience through selected highlights from Super Bowl halftime shows past (“Fix You”), interspersing choral gems like “it’s a beautiful day (U2)” and “purple rain (Prince)” and finally bringing everyone together in “Up & Up” to a message of universal togetherness, peace and hope.

To intimate that this show could be pulled apart like a pan of cinnamon rolls, dismissing this bite or that because it had more or less spice, lacked frosting or was on the crispy edge or in the melt-in-your-mouth center, displays a lack of appreciation for cinnamon rolls in general. In this Hooligan’s view, the Super Bowl 50 Halftime Show had an solid beginning, incredible buildup, breathtaking climax, and emotional denouement, like a classical sonata or a work of fine literature. As a fan of Coldplay, Beyonce AND of course, Bruno Mars (being a card-carrying member of the Bruno’s Lady Club), this writer can find no reason to dislike or dismiss any part(s) of #SB50Halftime – it will stand as one of the finest performance sets in history!