The arena darkens; a curtain featuring majestic palms is illuminated with pulsating lights, and a disembodied voice states, “Welcome to the Moonshine…. Jungle!” As blue lights glow, a rhythmic mélange comes to the aural foreground, and then… Bang! The curtain FALLS to an oceanic wave of emotion and cheers. Tens of thousands are about to be possessed deep in the heart of la jungla (the jungle). Bruno Mars and his Hooligans Band are poised to slay relentlessly, without mercy.

Throughout the Moonshine Jungle Tour, celebrities dot the audience and a few grace the stage (such as Lenny Kravitz, Gwen Stefani and Ed Sheeran). Beyond the lights are luminaries such as Tom Hanks, Rita Wilson, Mario Lopez, Jim Carrey, Leonard Nimoy, Beyonce, Jay-Z, Will Smith and Jada Pinkett-Smith… those who could not be present took to social media to gush. Most over the top award must go to actress Mindy Kaling, who tweeted during the Super Bowl, “Is it weird to say, I wish Bruno Mars was my son?”

The opening acts include (North America) Fitz and the Tantrums, Ellie Goulding, DJ Supra, Havana Brown, and Aloe Blacc; (Europe) Mayer Hawthorne; (Oceania) Miguel; (Asia) Poreotics; (North America/Caribbean) Aloe Blacc, Pharrell Williams, and Nico & Vinz. Each of the opening acts provides a unique level of excitement. The Moonshine Jungle Tour’s 2013 dates make the Top 25 Tours of 2013 (Billboard), coming in at #23 while grossing $46,417,795 in North America alone. Of 48 listed shows, 44 are sold out. For the entire 84 shows played in 2013, Mars grosses $72.4 million (Pollstar). Meanwhile, in January 2014, it is announced that 35 concerts will be added for the United States plus six more in Canada.

Arguably “the hardest working man in show business,” Bruno Mars continues to make headlines as the tour makes its way around the world. Among the high points:

• In December 2013, Bruno Mars is named Billboard Magazine’s Artist of the Year

• Bruno Mars begins his artist residency at the brand new Chelsea Theater in the Cosmopolitan Hotel & Casino on December 29, 2013, returning for New Year’s Eve (both sold out); he returns in May, August and October 2014

• On February 2, 2014, Bruno Mars headlines the most-watched Super Bowl halftime event ever, with guests The Red Hot Chili Peppers at Super Bowl XLVIII at the Met Life Stadium in New Jersey. This appearance is later nominated for Emmy Awards in the Outstanding Short-Format Live-Action Entertainment Program and Outstanding Lighting Design/Lighting Direction For A Variety Special categories. In addition, Bruno Mars makes history as the youngest artist ever to headline the Super Bowl Halftime show, with a total viewership of 115.3 million! This leads to an unprecedented demand for tickets, with resellers driving a hungry market and prompting the proposal of legislation dubbed the “Bruno Mars Act” (Senate Resolution 12) by Hawaii Senate President Donna Mercado Kim. This law, if passed, will require that tickets for Hawaii concerts be initially available only at the box office for a specified period of time to ensure that local audience have a fair shot at purchase.

• On May 31, 2014 Bruno Mars plays his first gig at the Hollywood Bowl in Los Angeles, California, where he had struggled as a musician for many years – sold completely out. He told the crowd before he started, “I’ve lived in L.A. over 10 years and I’ve never been to the Hollywood Bowl!” (LAWeekly.com). Following the slayage, he tweeted, “That was real! Thank you Hollywood Bowl! see y’all mañana” (sic) 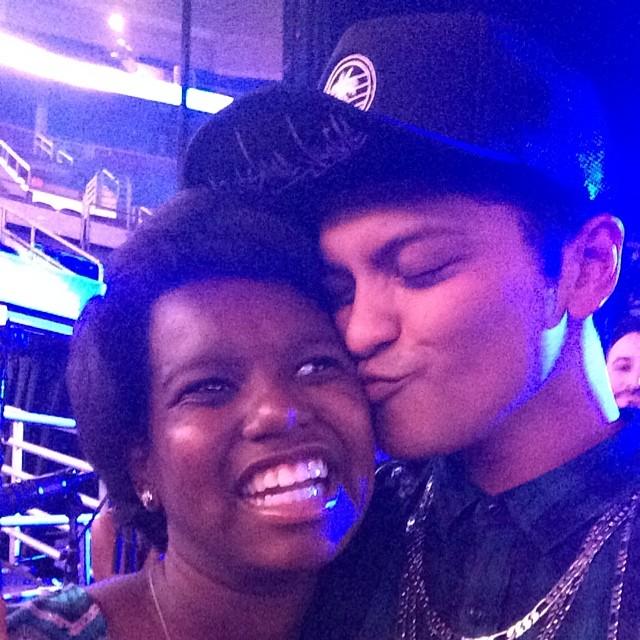 • June 28, 2014 Bruno’s heartfelt serenade to young Zumyah Thorpe melts hearts worldwide. Zumyah lost her mother and siblings to a drunk driver, surviving with physical limitations and brain damage; doctors believe her awakening to the sounds of Bruno’s singing and her own ability to sing his lyrics, contributes not only to her continued recovery, but also to her overall happiness. Bruno Mars is a longtime provider of musical healing therapy and supports organizations such as Musicians on Call in real life.

• On September 8, 2014 Bruno tweets that he has begun work on his 3rd album: “Now it’s time to start writing chapter 3. See you soon hooligans. Brunz”

• September 20, 2014 Bruno Mars joins Muhammad Ali in celebrating the 40th anniversary of the “Rumble in the Jungle” boxing match between Muhammad Ali and George Foreman, (CONGO14) fundraiser to benefit the Muhammad Ali Center.

• October 17-18, 2014, Bruno Mars and the Hooligans close out the artist residency at The Chelsea at the Cosmopolitan in Las Vegas, Nevada. These dates also signal the finale of the Moonshine Jungle Tour. Both nights sell out well in advance.

There are countless other appearances, accolades and awards, and these ancillary events become a part of the tapestry of the tour for Bruno’s fandom. Every new tidbit of news fuels the interest of those less familiar with Bruno Mars, while providing fodder for social media shares and conversation among the Hooligans, his devoted fan base.

The Magic of La Jungla 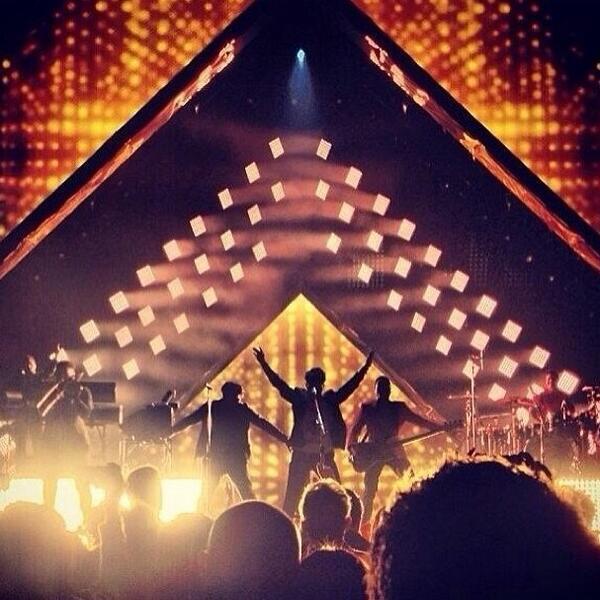 With this tour, the sharing of images and videos among the Hooligans is a wildfire out of control. Bruno occasionally implores the crowd to put down their phones and devices and enjoy the show, to no avail. In the end, the exposure does him nothing but good: instead of dampening interest, the postings fan the flames – the Moonshine Jungle Tour enjoys a nearly sold-out run, particularly following the Super Bowl XLVIII Halftime Show. Living up to the promise inspired by that showcase, Bruno and his Hooligans deliver.

Musically, the show enchants from beginning to end. The siren’s song of the ethereal “Moonshine” is but a gentle pull into the rabbit hole. The songs contained on Unorthodox Jukebox (2012), and Doo-Wops & Hooligans (2010) already provide the kind of musical diversity that will play anywhere, to just about anyone – from the sugary love anthem “Just the Way You Are” to “Show Me” with its rhythmic nod to “Pass the Dutchie” – to the disarmingly raw “Gorilla.”

Bruno’s background as a performer with his family band in lounges, hotels and resorts since the age of 2 schooled him in sensing the desires and needs of his audience. Throughout the set, songs like Barrett Strong’s “Money (That’s What I Want),” R. Kelley’s “Ignition” and Michael Jackson’s “Dirty Diana” are likely to pop up in the most intriguing nooks and crannies; music aficionados hunt slavishly to spot the insertion of these vocal Easter eggs (such as a call-and-response from The Isley Brothers’ “Shout”).

The band manipulates the music with such facility, teasing it into moods, smiles, laughter, and tears. An obvious emotional bond among the members shines through, creating a supportive, yet playful atmosphere. It is as though the audience has stumbled in upon an impromptu jam session. Each of the Hooligans owns his space on the stage while sharing knowing glances, grins, and a few charming “bits” (such as the Pickup Lines or I Gotchu segments). Moving about with the crisp energy of a sports team seconds away from winning a championship, the entire ensemble is committed to the core, well rehearsed and pitch-perfect. The Moonshine Jungle World Tour/Moonshine Jungle Tour will stand as one of the most ambitious, grandiose of productions to elicit the kind of intimacy usually found in a cabaret ever. It is a kind of magic – the kind only found in la jungla.

To maintain such vibrancy and creativity over the course of many months, takes a special kind of cohesiveness and cooperation – holding a shared mission. Bruno Mars and the Hooligans manage to remain a family longer than some marriages even last, a true testament to the collective power of this bond. From beyond the stage lights and all around the world, the Hooligans fandom is treated, through the group’s openness in both conventional and social media, to feeling like family themselves. Incredibly personal moments, both onstage and off, skip around the globe at the speed of light, as does an epic body of exceptional performances. We Hooligans are far from ready to let this Band of Brothers leave our sight, but we know that we must allow them to enjoy their loved ones and gather their strength for round 3. We want to wish Bruno, Philip, Phred, Jamareo, Eric, Kam, Dwayne, Jimmy, and John the peace and relaxation they’ve earned, and to thank them for the life-changing experience of the Moonshine Jungle!!!!