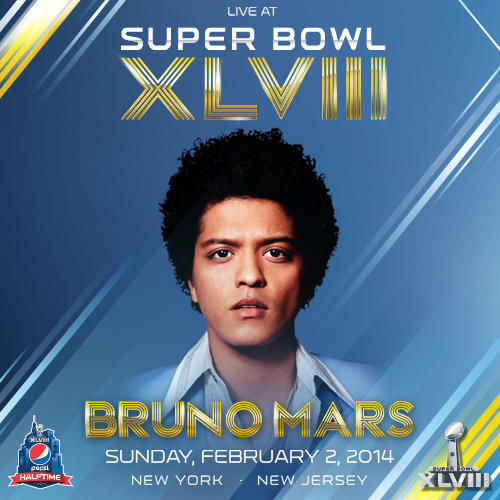 The halftime show for Superbowl XLVIII on February 2, 2014 begins as sponsor Pepsi’s familiar red, white and blue logos wink out, one by one to a roaring crowd.

Vocal fanfare resounds, as singing children silhouetted against an American flag animation which is transformed into the word “Prepare”, sing from the Bruno Mars/Travie McCoy collab “Billionaire”:

“Every time I close my eyes
I see my name in shining lights
A different city every night oh, I…
I swear… the world better prepare…!”

Their linked hands rise, and the lights grow red and sweep forward, as a glimpse of black and white electronic “snow” flashes briefly and bright pyrotechnic flames shoot up from beyond the stage, and we see Bruno Mars at a drum set. His “Whomp & Stomp” (what he calls the pompadour that had been his trademark during his previous tour and album, “Doo-Wops and Hooligans”) adds height to his 5’5″ frame, which has been whittled to sleekness during the rigorous 2013 leg of the “Moonshine Jungle World Tour.”

As the vamp from “Locked out of Heaven (LOOH)” begins, Bruno attacks the drums with a strong syncopation, moves to beating on the 4/4 rhythm, then energetically bobs his head as he settles into a Dancehall roll. Decked out by the House of Saint Laurent in golden blazer, black pants and thin black tie, white shirt and laced shoes, he throws his entire body into the performance.

The uninitiated may miss it, but Bruno’s loyal and devoted fan base (known as Hooligans – also the name of his band) is quick to notice the dedication to Bruno Mars’ mother, the late Bernadette “Bernie” San Pedro Bayot, who passed suddenly in June 2013. A replica of the tattoo Bruno wears of the name “Bernadette” across a yellow ribbon wrapped around a red heart, is on the bass drum he is working with such vigor he has already begun to sweat. His band lopes out onto the stage to more pyro, multicolored spots and the rhythm track of “LOOH.”

As Hooligans on the floor bounce, scream and cheer, the rest of the stadium and those who had never seen him perform are now getting a small dose of the incendiary mix of passion, voice and heart that is Bruno Mars. Bruno seems to savor every note of LOOH (a staple of his “Moonshine Jungle World Tour,” which continues into 2014) as though it is his first chance to share it. As Eric’s drum signals the intro to “Treasure,” the color scheme turns to gold, and Philip Lawrence issues the call to dance: “This is your opportunity to dance y’all – so lemme see you get loose!” The audience is way ahead of him, already clapping, dancing, waving, and singing the lyrics along with the band.

Let us pause for a moment…

It is necessary to bring ourselves back to the fact that this is the night of the 48th Super Bowl, and that the majority of those in attendance have come to watch the final showdown between the Denver Broncos and the Seattle Seahawks (the latter eventually emerge victorious, 43-8). This is not a concert, yet over the course of the next several minutes, many new Hooligans will come into being, snatching up Bruno’s entire catalog and catapulting both his debut (“Doo-Wops and Hooligans” – “DWAH”) and sophomore album (“Unorthodox Jukebox”) to the top of the sales charts (Hollywood Reporter).

As the band skips through the “Treasure Dance”, a series of slides and side skips, the electric guitar of “Runaway Baby” throws the Hooligans on the floor into a frenzy of nostalgic joy as they sing along to the retro hit. The lights are lowered, and a flame lighting effect licks across the stage and behind Bruno and company – perhaps a nod to James Brown’s “Famous Flames” or a hint of the Red Hot Chili Peppers to come? Then, a tribute to the Isley Brothers’ “Shout” as Bruno instructs everyone to go “a little bit softer now…” taking his voice sotto voce, lowering his body with the rest of the band, and then slowly bringing everything up again: “… a little bit louder now!” and he explodes into a James Brown shuffle with swoops, spins, dances back to the band, and joins them in a series of quarter-turn switch jumps after which they are silhouetted and, facing left, they stomp in unison, creating a beat with their feet. Following another round of shuffles, Bruno lets loose with a dramatic split, moving forward to the mic for the bridge, “I ain’t tryna hurt you baby, no no, no I just wanna work you baby – if you scared you better run!” High jogging in place, he raises his hand and throws in “Just give it away, give it away, give it away now…” – and the horns ascend to Bruno’s own vocal hit, which opens the doorway to Red Hot Chili Peppers’ (RHCP) jam on the one.

Anthony Kiedis (vocals), Michael “Flea” Balzary (bass), Chad Smith (drums), and Josh Klinghoffer (guitar), have hit the stage, as their 1991 hit and first #1 chart-topper (Billboard’s Modern Rock Tracks) “Give it Away” galvanizes the stadium, all eyes and ears forward. At this point, the rockers and Hooligans are as one, and the visual contrast of Kiedis and Mars creates as much of a mashup as the Soul, Rock and Funk mixture of the musical segue that has brought us here. Bruno is Elvis-cool with his coif, tailored suit and tie while a bare-chested and tattooed Kiedis sports black shorts and “meggings“, or “man leggings.” RHCP performs while the Hooligans bounce alongside the agile rockers; Kiedis, nearly twice Bruno’s age, is in super-trim form, leaping about the stage as Bruno adds hype to the verses alongside him.

Amid huge cheers and applause, Bruno embraces Kiedis and gives propers to the Red Hot Chili Peppers while the piano chords of Grammy Award-winning “Just the Way You Are” (“JTWYA” – Best Pop Male Vocal Performance, 2011) play in the background, and lighting effects generate the red, white and blue of waving American flags on the floor.

Tribute to our troops by starlights

Mars appears inside a neon light blue circle, and cameras pan around him, displaying the packed tiers filled with twinkling lights, while various members of the United States Armed Forces are projected onto the jumbo screens, sending greetings back home. As the final soldier blows a kiss to her husband and son, hearts (and eyes) well up while we zoom in on Bruno, alone, his face filled with emotion. The normal backbeat for the song is transformed to a military-style snare. As he completes the chorus of “JTWYA”, fireworks explode overhead: “And when you smile, the whole world stops and stares for a while, ’cause girl you’re amazing, just the way you are!”

From start to finish, this show is absolutely flawless: the transitions, the lighting, the energy from the crowd, both bands, and Bruno himself. As he climbs through the final notes of “Just the Way You Are”, he takes along with him millions of new fans, many of whom will declare themselves Hooligans within the day.

This Super Bowl halftime show, presented by Pepsi, is the most-watched halftime show of all time, racking up over 115 million viewers. Social media outlet Twitter, saw conversation about Bruno Mars rivaling all discussion of the Super Bowl game itself.

Hooligans the world over already knew before he hit this stage, what the world has come to realize – that Bruno Mars is a genuine superstar, who has worked hard for every inch of progress and takes nothing for granted. He is, in fact, ready for the Super Bowl, Prime Time, and respect. In a world where manufactured Pop stars are allowed to run rampant over the charts and playlists, take home awards, and earn too much press for their own good, true talent and dedication come out on top on this, of all nights. This “Rocketeer” stands tall and unafraid before a “Sky Full of Lighters,” and today, his life begins.