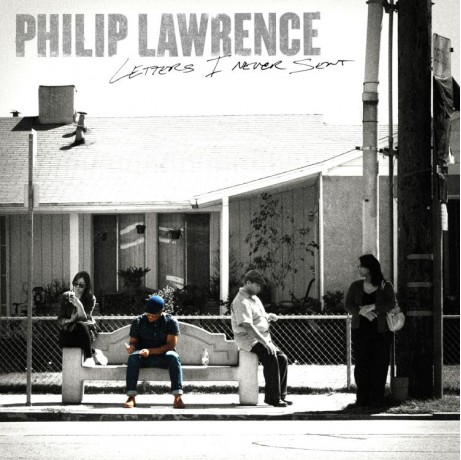 Anyone choosing to listen closely to Philip Lawrence’s debut LP “Letters I Never Sent” will find her/himself looking into a mirror. If the human condition was ever so gently and well served, it is through every poetic line of this underrated and under-promoted work.

We all know the things we should have said but did not, the things we wish we’d let someone know, the letters we ourselves never sent. Here, we have the privilege of getting to know the range of one individual, a full 360 degrees of love, loss, and redemption.

Philip Lawrence, who has already cemented his place in the pantheon of today’s top songwriters and producers, gives us a clear glimpse into what goes on in his heart as well as his head. One might surmise that he has a deeply religious background, for his songs are filled with the touchstones of such an upbringing (baptism, a heavenly father, sin and atonement) – and that his God is both approachable and and forgiving. He leads us through an awakening and self-discovery that is as unfettered as a gamboling lamb through sunny meadows, yet when the time is right; a curtain is drawn back into the pitch darkness of utter loneliness, selfishness and regret.

In “Cold Karma”, Philip lets us know he is no angel (who really is?) – and that his ‘life without consequence’ could not go on forever. With every hurt he delivers, he is adding up his own lashes on some invisible karmic meter that will issue the call to his eventual share of the pain. ‘How foolish of me, how foolish of every man… we punish ourselves by not being better men. Regret, guilt and shame, calling our names…’ As we listen, we cannot even find time to condemn any mistake of his, because this is the voice of all of us, if we are listening.

An almost mournful croon welcomes “Finally Free” which paints a man who had thought of love as just a fanciful notion (‘a blind man misplacing day…’) until he is struck by the love himself. The delicate skip of a piano obbligato gives way to the robust, guitar-driven chorus – ‘A look in your eyes stops the clock as time flies by… your eyes are open and your heart is finally free, finally flying free…’ He finally surrenders to the peace of unconditional love: ‘all that was wrong is now made right, all that is right is in your eyes’ … and with this new discovery, the croon returns, more affirmative and stronger, like an embrace.

“Heaven High” is a recounting of a man who has his Faustian moment and decides to take the walk on the Dark Side on his own terms. Having granted the Devil his ‘x’ on the dotted line, he lets his old and faithful Father know that not even the Four Horsemen could chill him, ‘hand over them reins ’cause I came to play’… This New Orleans Jazzy-style cut gives way to a Louis ‘Satchmo’ Armstrong scat as he relives the sowing of all oats, wild and otherwise, with the full confidence of the love God will always have for him. This Prodigal Son not only expects the fatted calf when he returns, he expects it under glace!

Regret at what could have been is the theme of “Holding On” – two people meet; the timing is not right. So they both stand on opposite sides of an invisible line of demarcation, neither of them asking the one question which could change things forever: ‘Would you hold on too tight… would you stand on the wrong side of right?’ The yearning is absolutely palpable, with passages like ‘she’s talking about nothing, I am listening with all my heart’… and it is clear that finally, the window closed, and they both moved on, with only the wondering left. A similar theme is found on “In the End”, which lists melodically, like a schooner on unpredictable waters – a seafarer’s song in triple time. The encounter, the tentative speculation, the unsaid and unspoken words first hover, then evaporate with the turning of night into day – ‘there’s a light on the horizon and it’s coming, too quickly coming…’ The pull persists with a repeated ‘all night, all day, too close or too far away’… and the music brings to mind a carousel, going round and round, until it slowly winds down, and ‘words fall from lips kissed with insanity’s pain – in the end, it all runs away…!’

The three-quarter time appears again, another sailing song, “Just Breathe”, about someone who is holding fast to a dream – could it be love, or something else, that he vows after being crushed, not to take on again: “This is how heroes die. A story that ends with a single tear, and a poetic line…!” But he cannot stop believing. He settles into himself, and chants the mantra ‘just breathe – just hold on, just keep calm’… But during the musical bridge, he is tossed about through an intense storm of a guitar solo, and after the storm, the clouds break and he once again declares that it would be the last time. Then, the beat of his heart brings him back to asking, and preparing, for his dreams to come true. Off he sails as the tone of the music turns almost jaunty, and his high notes of celebration in the distance tell you that he will never give up.

A song of remembrance and regret is “Lady” – it’s hard to doubt that anyone with a heart has not been here, on one side or the other. In this case, he muses about the one who left her bereft and lonely, who gave her ‘tears to drink and shadows to eat.’ This song’s strings give its three-quarter meter a loving lilt. As it progresses, the verse brings us around to the realization that it may actually be our songwriter who is the cause of the lady’s heartbreak ‘you were the best thing that I ever left.’ Although he seems to know that he will not be the one to mend her heart, he does not want her to ever give up on knowing that she is worthy of the love she will eventually have (‘even if he’s not sitting here… one day your lover will appear – one sweet day…’).

In an interesting departure, Philip includes a lullaby he sang that ended up on a voicemail that he had left to his children – again, in three-quarter time: ‘every time you close your eyes, the angels will always be by your side’ – it must be incredibly difficult to be on the road or on projects that take you away from your loved ones, and children deserve to know that they are more than a notion. To have included this, indicates Lawrence’s commitment to his babies. Daddy will always, always love them, no matter where he has to be!

“Neverland” is an evocative piece, recounting his ‘salad days’ dealing with writers’ block, closed doors and perhaps depression and frustration, and even some degree of immaturity as he aspired to reach his goals. It is during these times when we find out how many times we can trip, fall, get back up and find our way onto the road we have chosen. Seeking clarity while scrambling to survive is not easy, but in this song we find that he was relentless in his ability to regroup time after time and finally stand up on solid ground: ‘Now my mind is so clear, demons are banished from here…’ This song is likely in reference to Philip’s days as an amusement park performer as he worked to pay the bills while he dreamed big dreams.

A violin provides the fanfare to a selection that is pretty much a tango between a man and a woman – “Slow Down” is filled with cheerful innuendo via tempo and lyric, yet it is an intimate and sexy passage through an evening filled with some serious teasing and a request for an exchange of numbers and a follow-up meeting. The abrupt end to the song, ‘oh baby… baby’ leaves one wondering if she’s left him holding his pen in his hand (smile)…

“Trying Times” expresses a universal helplessness with living in a world with so much that is out of our control: ‘trying to find the front of the line but the front of the line’s being led by the blind…’ The Reggae beat of this song is delivered at such a pace that the loping genre is turned into rebel music featuring a chorus punctuated with shouts ‘hey, hey, hey!’ that give it a Punk feel. There is, however, a chance for all of us, if we would only find He who is always there through all seasons – and watch miracles happen. It is possible that this man is the part of the Creator that is within us always, guiding us, if we would only LISTEN (‘if you gather close enough, he’ll tell you what he knows… he’ll whisper into a star – and watch as the night explodes!’)

Making amends to a loved one cannot be easy, and in “Washing Me Clean,” Philip describes (using another Reggae-infused arrangement) the rapprochement between two estranged lovers. Of course, there is a bit of literal and figurative hot water to be got out of the way before the session could turn into the pleasurably mutual splashing about of two tender lovers. Similarly, a man asking for the return of his lady is the topic of “When You Come Back”, a song filled with incredibly well-assembled lyrics that recount the soul-shattering breakup, the attempts to reconcile, and then, at the end, the allusion to being together until death. It is clear that the desire for her is on a level that transcends the physical as he sings ‘I want you to dry my tears and wipe my slate clear…’ The promise of love that is unconditional is repeated, ‘When you come back, I won’t even ask, where you have been or what you’ve been doing. I just want you back, just want to hear you laugh…’

To be able to make amends by acknowledging not only our part in the hurt but the hurt itself is but one step on a very long road. In “Letters I Never Sent”, Philip Lawrence is saying, he has what it takes on the inside to see through every promise, step and pledge; that he is now ready to be a man that he himself can be proud of. This is a well-crafted, lyrically superior collection of reminiscenses that will invade your thoughts and your soul.